Update: I’ve included another way of saving a separate plot by group in this article, as pointed out by @monitus. Actually, this is the preferred solution; using dplyr::do() is deprecated, according to Hadley Wickham himself.

I’ll be honest: the title is a bit misleading. I will not use purrr that much in this blog post. Actually, I will use one single purrr function, at the very end. I use dplyr much more. However Make ggplot2 purrr sounds better than Make ggplot dplyr or whatever the verb for dplyr would be.

Also, this blog post was inspired by a stackoverflow question and in particular one of the answers. So I don’t bring anything new to the table, but I found this stackoverflow answer so useful and so underrated (only 16 upvotes as I’m writing this!) that I wanted to write something about it.

Basically the idea of this blog post is to show how to create graphs using ggplot2, but by grouping by a factor variable beforehand. To illustrate this idea, let’s use the data from the Penn World Tables 9.0. The easiest way to get this data is to install the package called pwt9 with:

and then load the data with:

Let’s us also order the countries in the data frame as I have written them in country_list:

You might be wondering why this is important. At the end of the article, we are going to save the plots to disk. If we do not re-order the countries inside the data frame as in country_list, the name of the files will not correspond to the correct plots!

Update: While this can still be interesting to know, especially if you want to order the bars of a barplot made with ggplot2, I included a suggestion by @expersso that does not require your data to be ordered!

Now when you want to plot the same variable by countries, say avh (Average annual hours worked by persons engaged), the usual way to do this is with one of facet_wrap() or facet_grid(): 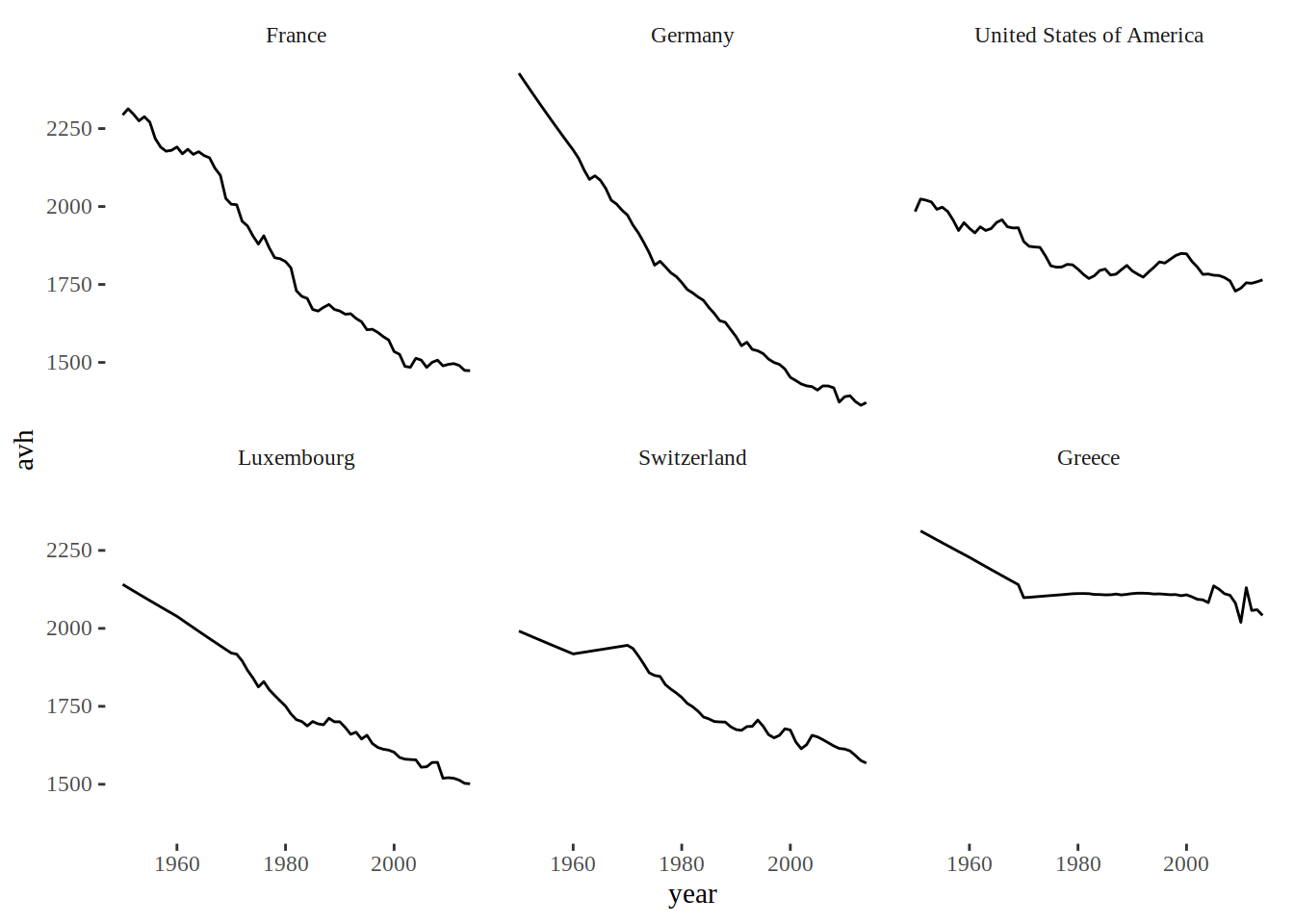 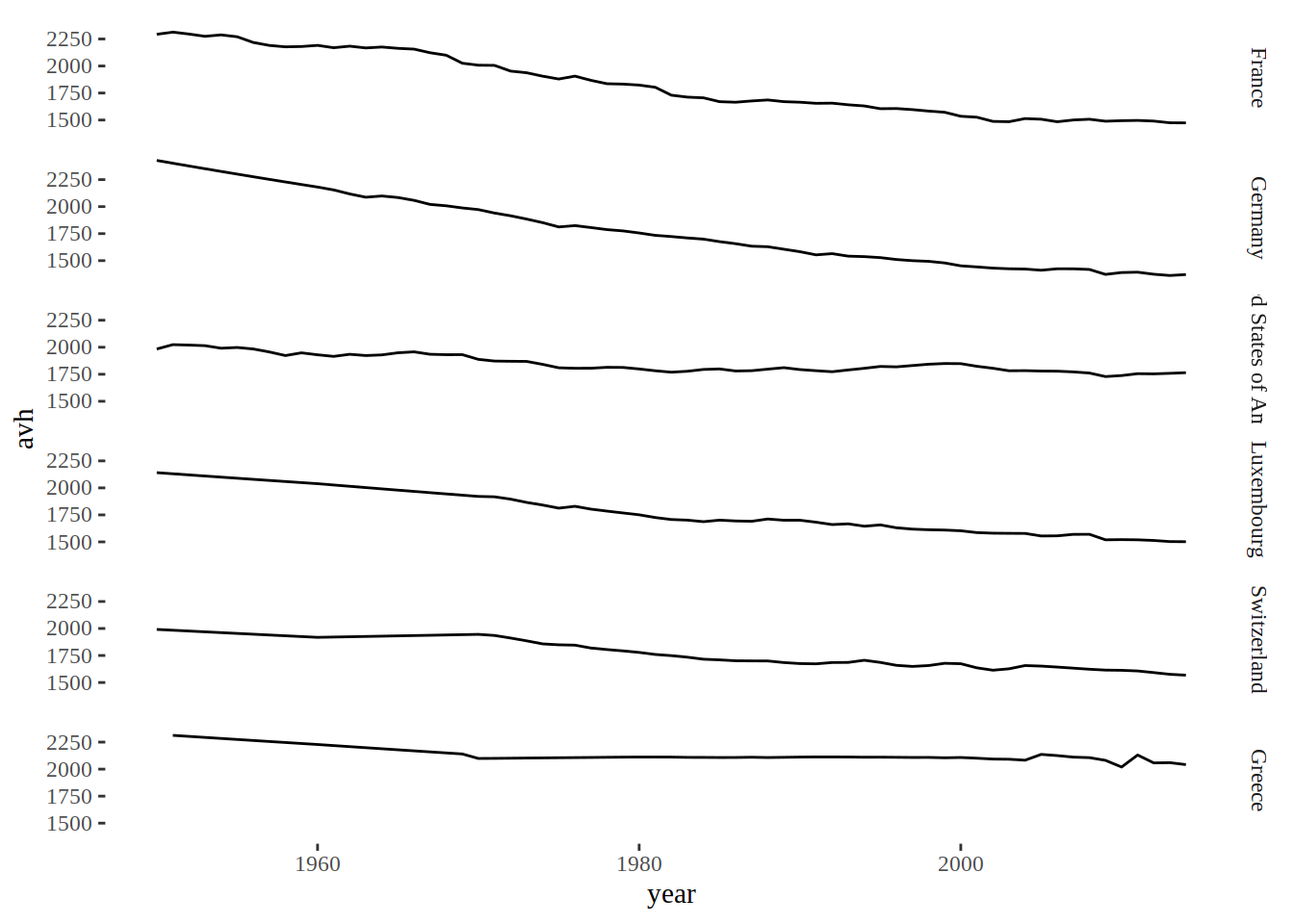 As you can see, for this particular example, facet_grid() is not very useful, but do notice its argument, country~., which is different from facet_wrap()’s argument. This way, I get the graphs stacked horizontally. If I had used facet_grid(~country) the graphs would be side by side and completely unreadable.

Now, let’s go to the meat of this post: what if you would like to have one single graph for each country? You’d probably think of using dplyr::group_by() to form the groups and then the graphs. This is the way to go, but you also have to use dplyr::do(). This is because as far as I understand, ggplot2 is not dplyr-aware, and using an arbitrary function with groups is only possible with dplyr::do().

Update: As explained in the intro above, I also added the solution that uses tidyr::nest():

And this is the approach that uses tidyr::nest():

If you know dplyr at least a little bit, the above lines should be easy for you to understand. But notice how we get the title of the graphs, with ggtitle(unique(.$country)), which was actually the point of the stackoverflow question.

Update: The modern version uses tidyr::nest(). Its documentation tells us:

There are many possible ways one could choose to nest columns inside a data frame. nest() creates a list of data frames containing all the nested variables: this seems to be the most useful form in practice. Let’s take a closer look at what it does exactly:

This is why I love lists in R; we get a tibble where each element of the column data is itself a tibble. We can now apply any function that we know works on lists.

What might be surprising though, is the object that is created by this code. Let’s take a look at plots:

As dplyr::do()’s documentation tells us, the return values get stored inside a list. And this is exactly what we get back; a list of plots! Lists are a very flexible and useful class, and you cannot spell list without purrr (at least not when you’re a neRd).

Here are the final lines that use purrr::map2() to save all these plots at once inside your working directory:

Update: I have changed the code below which does not require your data frame to be ordered according to the variable country_list.

As I said before, if you do not re-order the countries inside the data frame, the names of the files and the plots will not match. Try running all the code without re-ordering, you’ll see!

Update: Many thanks to the readers of this article and for their useful suggestions. I love the R community; everyday I learn something new and useful!