Update 2022: there some literature advising against using techniques to artificially balance a dataset, for example one. Use at your own risks!

In this blog post, I am going to train a random forest on census data from the US to predict the probability that someone is looking for a job. To this end, I downloaded the US 1990 census data from the UCI Machine Learning Repository. Having a background in economics, I am always quite interested by such datasets. I downloaded the raw data which is around 820mb uncompressed. You can download it from this folder here.

The variable names are always written in upper case and sometimes end with some numbers. Regular expressions will help extract these column names:

Using readLines I load this text file into R. Then with stringr::str_extract_all, I can extract the variable names from this text file. The regular expression, ^[A-Z]+(\\d{1,}|[A-Z])\\s+ can seem complicated, but by breaking it up, it’ll be clear:

This regular expression matches only the variable names. By using ^ I only limit myself to the uppercase letters at the start of the line, which already removes a lot of unneeded lines from the text. Then, by matching numbers or letters, followed by spaces, I avoid matching strings such as VAR:. There’s probably a shorter way to write this regular expression, but since this one works, I stopped looking for another solution.

Now that I have a vector called column_names, I can baptize the columns in my dataset:

I also add a column called caseid to the dataset, but it’s actually not really needed. But it made me look for and find rownames_to_column(), which can be useful:

Now I select the variables I need. I use dplyr::select() to select the columns I need (actually, I will remove some of these later for the purposes of the blog post, but will continue exploring them. Maybe write a part 2?):

Now, I convert factor variables to factors and only relevel the race variable:

So the variable I want to predict is looking which has 2 levels (I removed the level 0, which stands for NA). I convert all the variables that are supposed to be factors into factors using mutate_at() and then reselect a subsample of the columns. census is now a tibble with 39 columns and 2458285 rows. I will train the forest on a subsample only, because with cross validation it would take forever on the whole dataset.

I run the training on another script, that I will then run using the Rscript command instead of running it from Spacemacs (yes, I don’t use RStudio at home but Spacemacs + ESS). Here’s the script:

90% of the individuals in the sample are not looking for a new job. For training purposes, I will only use 50000 observations instead of the whole sample. I’m already thinking about writing another blog post where I show how to use the whole data. But 50000 observations should be more than enough to have a pretty nice model. However, having 90% of observations belonging to a single class can cause problems with the model; the model might predict that everyone should belong to class 2 and in doing so, the model would be 90% accurate! Let’s ignore this for now, but later I am going to tackle this issue with a procedure calleds SMOTE.

Now, using caret::trainIndex(), I partition the data into a training sample and a testing sample:

I also save the testing data to disk, because when the training is done I’ll lose my R session (remember, I’ll run the training using Rscript):

Before training the model, I’ll change some options; I’ll do 5-fold cross validation that I repeat 5 times. This will further split the training set into training/testing sets which will increase my confidence in the metrics that I get from the training. This will ensure that the best model really is the best, and not a fluke resulting from the splitting of the data that I did beforehand. Then, I will test the best model on the testing data from above:

Finally, we can train the model:

Because it takes around 1 and a half hours to train, I save the model to disk using saveRDS():

The picture below shows all the cores from my computer running and RAM usage being around 20gb during the training process: 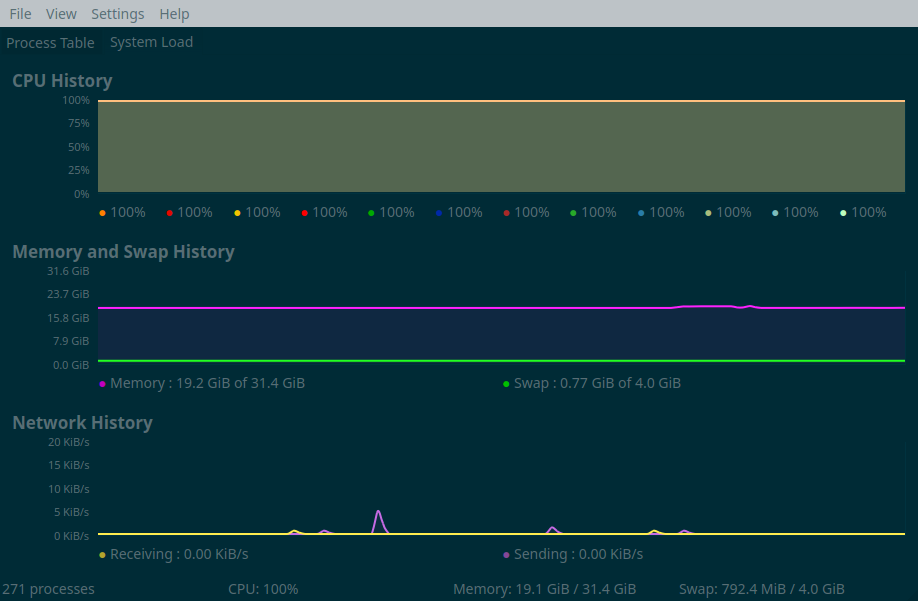 And this the results of training the random forest on the unbalanced data: 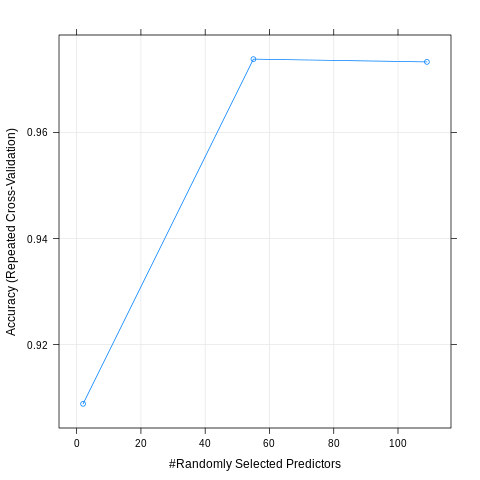 To train to make the model more accurate in predicting class 1, I will resample the training set, but by downsampling class 2 and upsampling class 1. This can be done with the function SMOTE() from the {DMwR} package. However, the testing set should have the same distribution as the population, so I should not apply SMOTE() to the testing set. I will resplit the data, but this time with a 95/5 % percent split; this way I have 5% of the original dataset used for testing, I can use SMOTE() on the 95% remaining training set. Because SMOTEing takes some time, I save the SMOTEd training set using readRDS() for later use:

The testing set has 34780 observations and below you can see the distribution of the target variable, looking:

Here are the results: 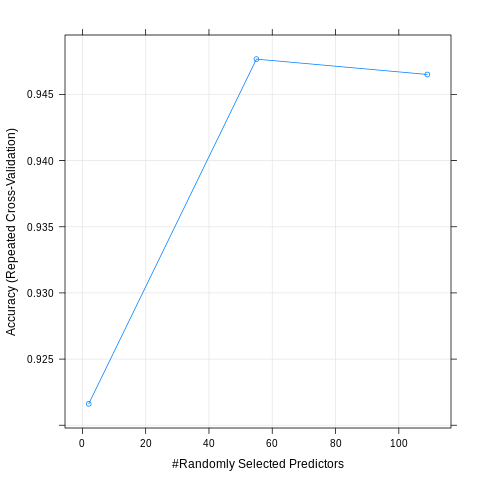 The balanced accuracy is higher, but unlike what I expected (and hoped), this model is worse in predicting class 1! I will be trying one last thing; since I have a lot of data at my disposal, I will simply sample 25000 observations where the target variable looking equals 1, and then sample another 25000 observations where the target variable equals 2 (without using SMOTE()). Then I’ll simply bind the rows and train the model on that:

And here are the results:

Looks like it’s not much better than using SMOTE()!

There are several ways I could achieve better predictions; tuning the model is one possibility, or perhaps going with another type of model altogether. I will certainly come back to this dataset in future blog posts!

Using the best model, let’s take a look at which variables are the most important for predicting job search:

It’s also possible to have a plot of the above: 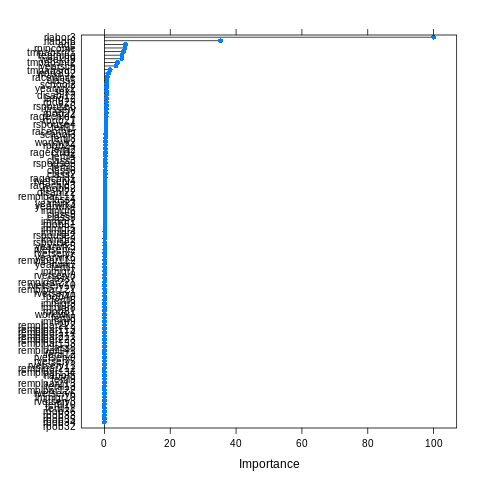 To make sense of this, we have to read the description of the features here.

rlabor3 is the most important variable, and means that the individual is unemployed. rlabor6 means not in the labour force. Then the age of the individual as well as the individual’s income play a role. tmpabsnt is a variable that equals 1 if the individual is temporary absent from work, due to a layoff. All these variables having an influence on the probability of looking for a job make sense, but looks like a very simple model focusing on just a couple of variables would make as good a job as the random forest.