Importing 30GB of data into R with sparklyr

Disclaimer: the first part of this blog post draws heavily from Working with CSVs on the Command Line, which is a beautiful resource that lists very nice tips and tricks to work with CSV files before having to load them into R, or any other statistical software. I highly recommend it! Also, if you find this interesting, read also Data Science at the Command Line another great resource!

In this blog post I am going to show you how to analyze 30GB of data. 30GB of data does not qualify as big data, but it’s large enough that you cannot simply import it into R and start working on it, unless you have a machine with a lot of RAM.

Let’s start by downloading some data. I am going to import and analyze (very briefly) the airline dataset that you can download from Microsoft here. I downloaded the file AirOnTimeCSV.zip from AirOnTime87to12. Once you decompress it, you’ll end up with 303 csv files, each around 80MB. Before importing them into R, I will use command line tools to bind the rows together. But first, let’s make sure that the datasets all have the same columns. I am using Linux, and if you are too, or if you are using macOS, you can follow along. Windows users that installed the Linux Subsystem can also use the commands I am going to show! First, I’ll use the head command in bash. If you’re familiar with head() from R, the head command in bash works exactly the same:

let’s also check the 5 first lines of the last file:

Why do that in bash instead of R? This way, I don’t need to import the data into R before checking its contents!

It does look like the structure did not change. Before importing the data into R, I am going to bind the rows of the datasets using other command line tools. Again, the reason I don’t import all the files into R is because I would need around 30GB of RAM to do so. So it’s easier to do it with bash:

This > operator looks like the now well known pipe operator in R, %>%, but in bash, %>% is actually |, not >. > redirects the output of the left hand side to a file on the right hand side, not to another command. On the second line, I loop over the files. I list the files with ls, and because I want only to loop over those that are named airOTxxxxx I use a regular expression, airOT* to only list those. The second part is do cat $file. do is self-explanatory, and cat stands for catenate. Think of it as head, but on all rows instead of just 5; it prints $file to the terminal. $file one element of the list of files I am looping over. But because I don’t want to see the contents of $file on my terminal, I redirect the output with the pipe, | to another command, sed. sed has an option, "1 d", and what this does is filtering out the first line, containing the header, from $file before appending it with >> to combined.csv. If you found this interesting, read more about it here.

This creates a 30GB CSV file that you can then import. But how? There seems to be different ways to import and work with larger than memory data in R using your personal computer. I chose to use {sparklyr}, an R package that allows you to work with Apache Spark from R. Apache Spark is a fast and general engine for large-scale data processing, and {sparklyr} not only offers bindings to it, but also provides a complete {dplyr} backend. Let’s start:

I first load {sparklyr} and the {tidyverse} and also define a spark_dir. This is because Spark creates a lot of temporary files that I want to save there instead of my root partition, which is on my SSD. My root partition only has around 20GO of space left, so whenever I tried to import the data I would get the following error:

In order to avoid this error, I define this directory on my 2TO hard disk. I then define the temporary directory using the two lines below:

This is not sufficient however; when I tried to read in the data, I got another error:

The solution for this one is to add the following lines to your config():

Finally, I can load the data. Because I am working on my machine, I connect to a "local" Spark instance. Then, using spark_read_csv(), I specify the Spark connection, sc, I give a name to the data that will be inside the database and the path to it:

On my machine, this took around 25 minutes, and RAM usage was around 6GO.

It is possible to use standard {dplyr} verbs with {sparklyr} objects, so if I want the mean delay at departure per day, I can simply write:

That’s amazing, only 0.06 seconds to compute these means! Wait a minute, that’s weird… I mean my computer is brand new and quite powerful but still… Let’s take a look at mean_dep_delay:

Also, because it took such a long time to compute: I save it to disk:

So now that I transferred this sparklyr table to a standard tibble in R, I can create a nice plot of departure delays: 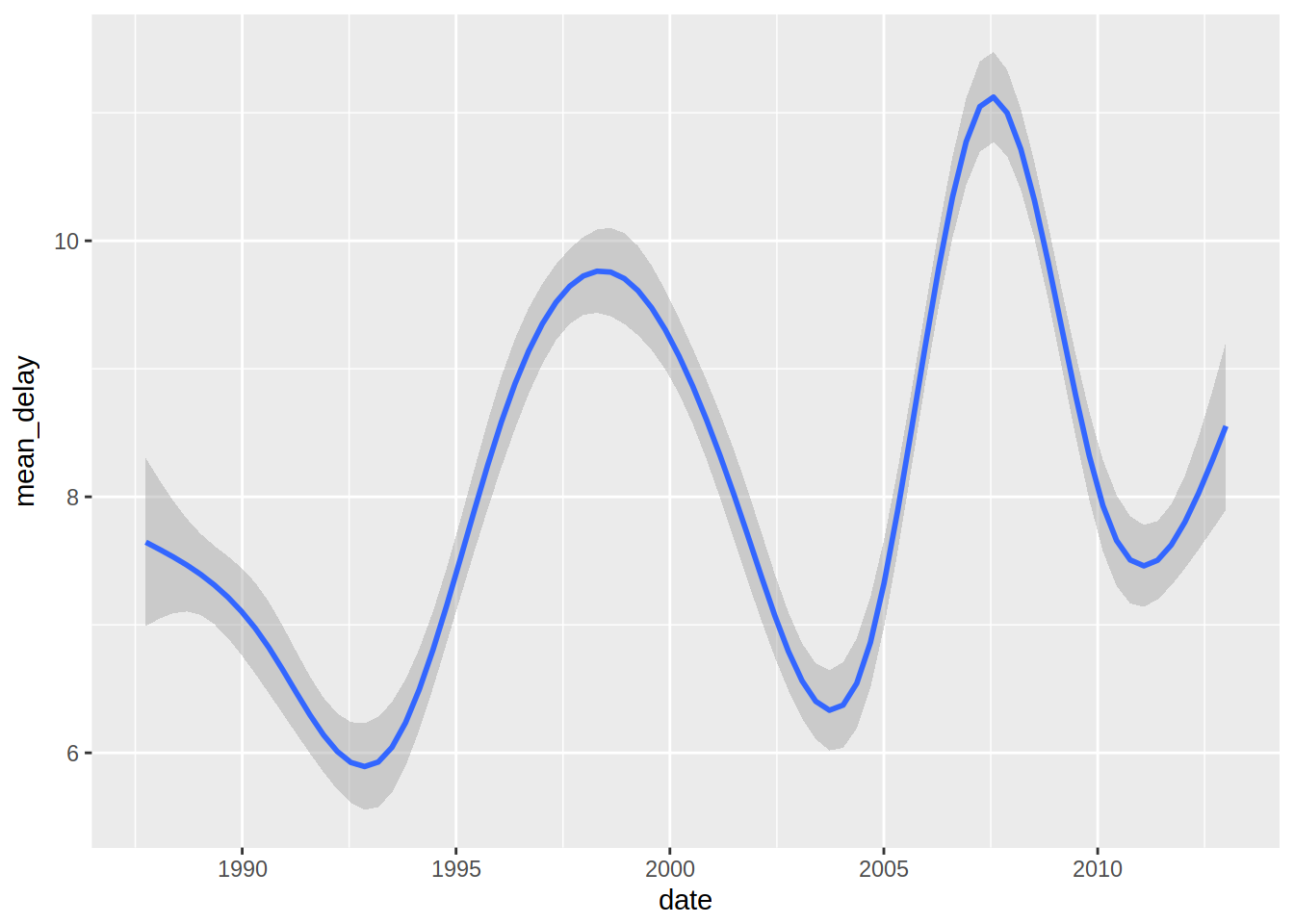 That’s it for now, but in a future blog post I will continue to explore this data!