What would a keyboard optimised for Luxembourguish look like? 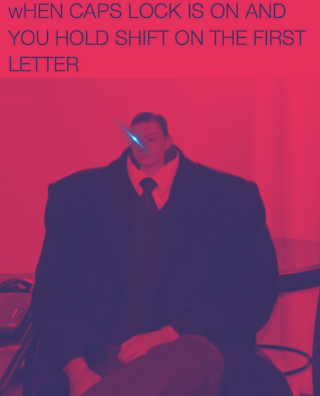 To come up with the BÉPO layout, ideas from a man named August Dvorak were applied for the French language. Today, the keyboard layout that is optimised for English is called after him, the DVORAK layout. Dvorak’s ideas were quite simple; unlike the QWERTY layout, his layout had to be based on character frequency of the English language. The main idea is that the most used characters of the language should be on the home row of the keyboard. The home row is the row where you lay your fingers on the keyboard when you are not typing (see picture below). 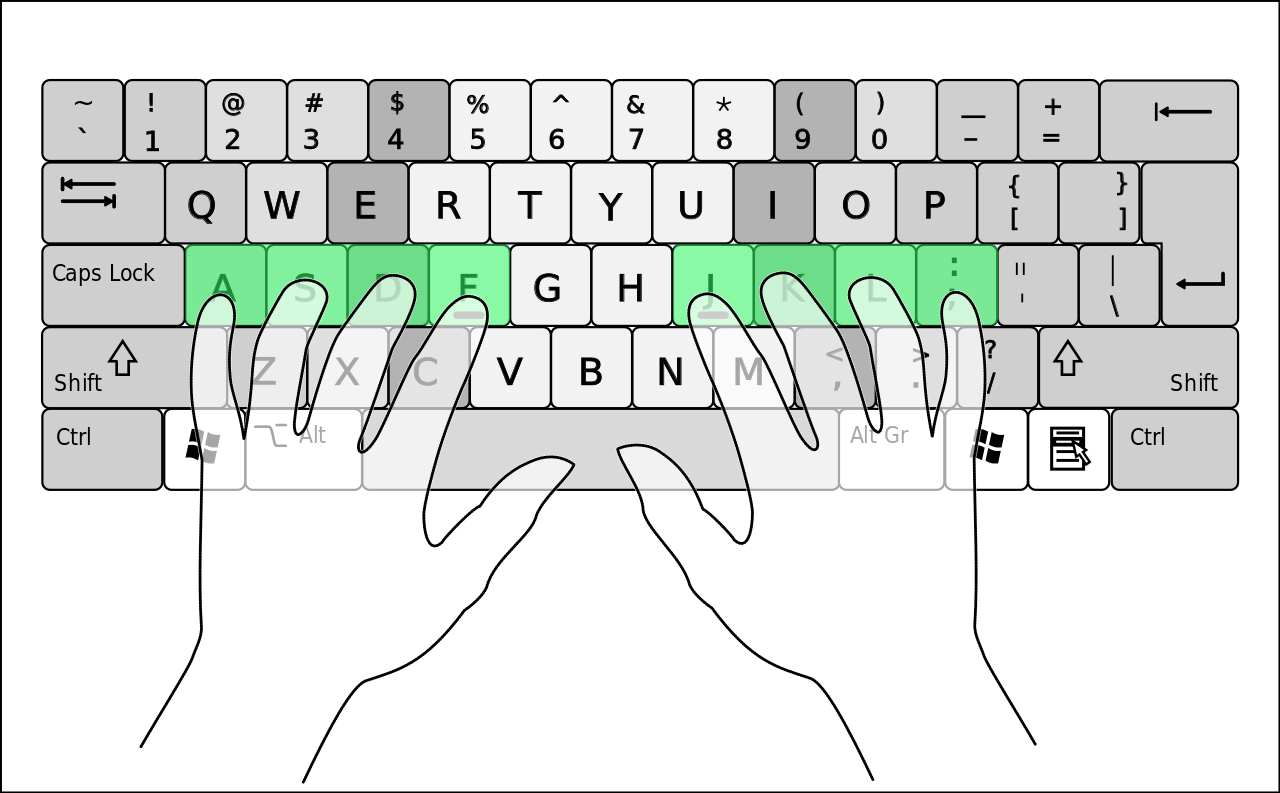 The problem with the “standard” layouts, such as QWERTY, is that they’re all absolute garbage, and not optimized at all for typing on a computer. For instance, look at the heatmap below, which shows the most used characters on a QWERTY keyboard when typing an a standard English text:

The same text on the DVORAK layout, shows how superior it is:

As you can see, this is much much better. The same idea was applied to develop the BÉPO layout for French. And because character frequency is quite similar across languages, learning a layout such as the BÉPO not only translates to more efficient typing for French, but also for other languages, such as English, as already explained above.

Because I don’t even want to see the QWERTY keycaps, I bought blank keycaps to replace the ones that come with the keyboard. Anyway, this made me think about how crazy it is that in 2020 people still use absolute garbage keyboard layouts (and keyboards by the way) to type on, when their job is basically only typing all day long. It made me so angry that I even made a video, which you enjoy here.

The other thing I thought about was the specific case of Luxembourg, a country with 3 official languages (Luxembourguish, French and German), a very large Portuguese minority, and where English became so important in recent years that the government distributed leaflets in English to the population (along with leaflets in French, Luxembourguish, German and Portuguese of course) explaining what is and is not allowed during the period of containment. What would a keyboard optimized for such a unique country look like?

Of course, the answer that comes to mind quickly is to use the BÉPO layout; even though people routinely write in at least 3 of the above-mentioned languages, French is still the one that people use most of the time for written communication (at least, that’s my perception). The reason is that while Luxembourguish is the national language, and the language of the native population, French has always been the administrative language, and laws are still written in French only, even though they’re debated in Luxembourguish in the parliament. However, people also routinely write emails in German or English, and more and more people also write in Luxembourguish. This means that a keyboard optimized for Luxembourguish, or rather, for the multilinguistic nature of the Luxembourguish country, should take into account all these different languages. Another thing to keep in mind is that Luxembourguish uses many French words, and as such, writing these words should be easy.

So let’s start with the BÉPO layout as a base. This is what it looks like:

A heatmap of character frequencies of a French, or even English, text would show that the most used characters are on the home row. If you compare DVORAK to BÉPO, you will see that the home row is fairly similar. But what strikes my colleagues when they see a picture of the BÉPO layout, is the fact that the characters é, è, ê, à and ç can be accessed directly. They are so used to having these characters only accessible by using some kind of modifier key that their first reaction is to think that this is completely stupid. However, what is stupid, is not having these letters easily accessible, and instead having, say, z easily accessible (the French “standard” layout is called AZERTY, which is very similar and just as stupid as the QWERTY layout. The letter Z is so easy to type on, but is almost non-existing in French!).

So let’s analyze character frequencies of a Luxembourguish text and see if the BÉPO layout could be a good fit. I used several text snippets from the Bible in Luxembourguish for this, and a few lines of R code:

Now that I’ve get the urls, let’s get the text out of it:

texts is a list containing the raw text from the website. I used several functions from the {rvest} package to do this. I won’t comment on them, because this is not a tutorial about webscraping (I’ve written several of those already), but a rant about keyboard layout gosh darn it.

Anyway, let’s now take a look at the character frequencies, and put that in a neat data frame:

Computing the frequencies is now easy:

Let’s start with the obvious differences: there is not a single instance of the characters è, ê or ç, which are used in French only. There are however instances of ü, ä, and ë. These characters should be easily accessible, however their frequencies are so low, that they could still only be accessible using a modifier key, and it would not be a huge issue. However, since ç does not appear at all, maybe it could be replaced by ä and ê could be replaced by ë. But we must keep in mind that since the average Luxembourger has to very often switch between so many languages, I would suggest that these French characters that would be replaced should still be accessible using a modifier such as Alt Gr. As for the rest, the layout as it stands is likely quite ok. Well, actually I know it’s ok, because when I write in Luxembourguish using the BÉPO layout, I find it quite easy to do. But let’s grab a French and a German text, and see how the ranking of the characters compare. Let’s get some French text:

Let’s now do the same for German:

Let’s now visualize how the rankings evolve between these three languages. For this, I’m using the newggslopegraph() function from the {CGPfunctions} package: 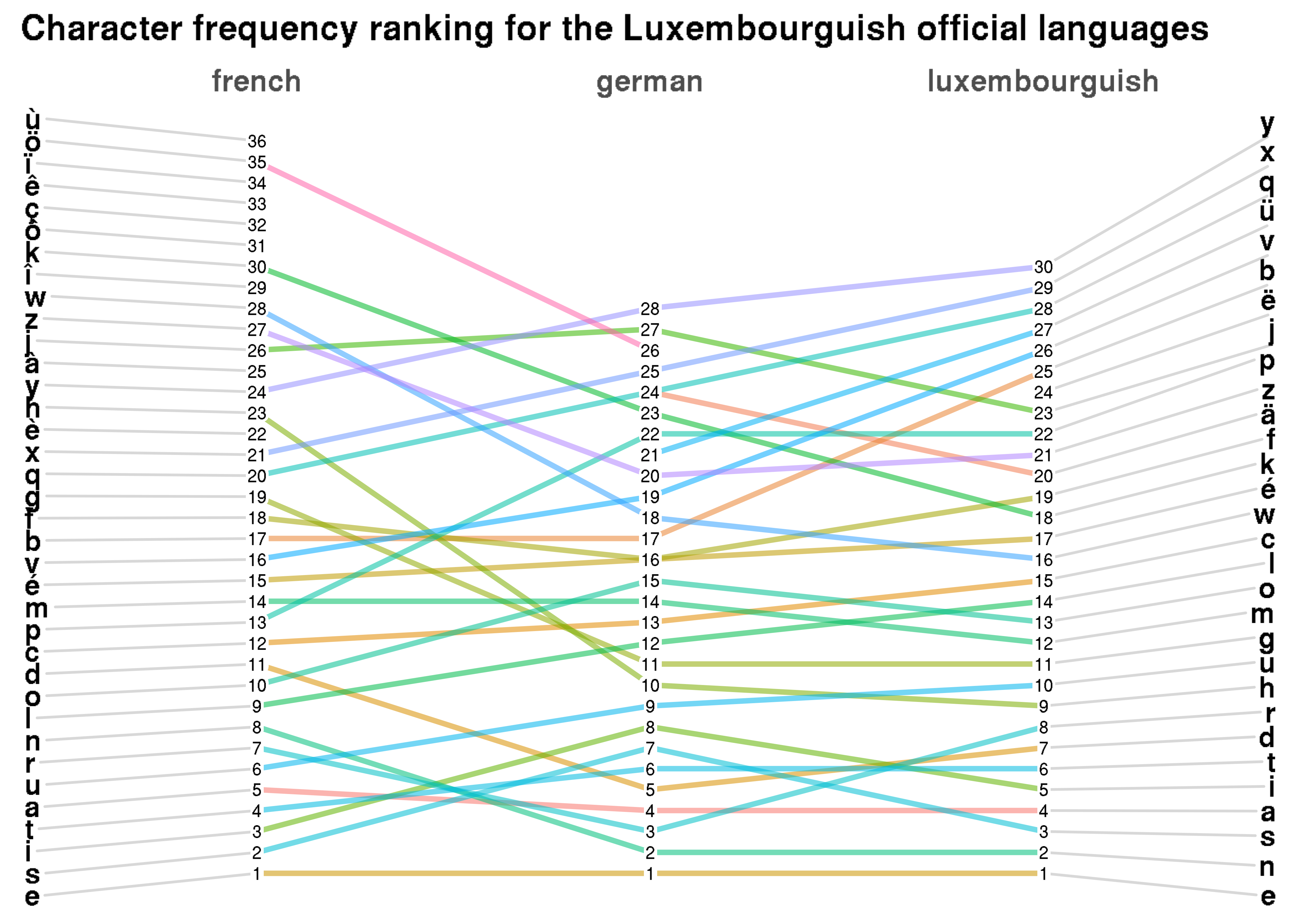 Certain things pop out of this plot: the rankings of the German and Luxembourguish languages are more similar than the rankings of French and Luxembourguish, but overall, the three languages have practically the same top 10 characters. Using the same base as the BÉPO layout should be comfortable enough, but the characters h and g, which are not very common in French, are much more common in Luxembourguish, and should thus be better placed. I would advise against using the German ergonomic/optimized layout, however, because as I said in the beginning, French is still probably the most written language, certainly more often written than German. So even though the frequencies of characters are very similar between Luxembourguish and German, I would still prefer to use the French BÉPO layout.

I don’t know if there ever will be an ergonomic/optimized layout for Luxembourguish, but I sure hope that more and more people will start using layouts such as the BÉPO, which are really great to use. It takes some time to get used to, but in general in about one week of usage, maybe two, you should be as fast as you were on the legacy layout.