Econometrics and Free Software
About Me
Who am I? Projects Research Software
Blog
A tutorial on tidy cross-validation with R Analyzing NetHack data, part 1: What kills the players Analyzing NetHack data, part 2: What players kill the most Building a shiny app to explore historical newspapers: a step-by-step guide Classification of historical newspapers content: a tutorial combining R, bash and Vowpal Wabbit, part 1 Classification of historical newspapers content: a tutorial combining R, bash and Vowpal Wabbit, part 2 Curly-Curly, the successor of Bang-Bang Dealing with heteroskedasticity; regression with robust standard errors using R Easy time-series prediction with R: a tutorial with air traffic data from Lux Airport Exporting editable plots from R to Powerpoint: making ggplot2 purrr with officer Fast food, causality and R packages, part 1 Fast food, causality and R packages, part 2 For posterity: install {xml2} on GNU/Linux distros Forecasting my weight with R From webscraping data to releasing it as an R package to share with the world: a full tutorial with data from NetHack Get text from pdfs or images using OCR: a tutorial with {tesseract} and {magick} Getting data from pdfs using the pdftools package Getting the data from the Luxembourguish elections out of Excel Going from a human readable Excel file to a machine-readable csv with {tidyxl} Historical newspaper scraping with {tesseract} and R How Luxembourguish residents spend their time: a small {flexdashboard} demo using the Time use survey data Imputing missing values in parallel using {furrr} Intermittent demand, Croston and Die Hard Looking into 19th century ads from a Luxembourguish newspaper with R Making sense of the METS and ALTO XML standards Manipulate dates easily with {lubridate} Manipulating strings with the {stringr} package Maps with pie charts on top of each administrative division: an example with Luxembourg's elections data Missing data imputation and instrumental variables regression: the tidy approach Modern R with the tidyverse is available on Leanpub Objects types and some useful R functions for beginners Pivoting data frames just got easier thanks to `pivot_wide()` and `pivot_long()` R or Python? Why not both? Using Anaconda Python within R with {reticulate} Searching for the optimal hyper-parameters of an ARIMA model in parallel: the tidy gridsearch approach Some fun with {gganimate} Split-apply-combine for Maximum Likelihood Estimation of a linear model Statistical matching, or when one single data source is not enough The best way to visit Luxembourguish castles is doing data science + combinatorial optimization The never-ending editor war (?) The year of the GNU+Linux desktop is upon us: using user ratings of Steam Play compatibility to play around with regex and the tidyverse Using Data Science to read 10 years of Luxembourguish newspapers from the 19th century Using a genetic algorithm for the hyperparameter optimization of a SARIMA model Using cosine similarity to find matching documents: a tutorial using Seneca's letters to his friend Lucilius Using linear models with binary dependent variables, a simulation study Using the tidyverse for more than data manipulation: estimating pi with Monte Carlo methods What hyper-parameters are, and what to do with them; an illustration with ridge regression {disk.frame} is epic {pmice}, an experimental package for missing data imputation in parallel using {mice} and {furrr} Building formulae Functional peace of mind Get basic summary statistics for all the variables in a data frame Getting {sparklyr}, {h2o}, {rsparkling} to work together and some fun with bash Importing 30GB of data into R with sparklyr Introducing brotools It's lists all the way down It's lists all the way down, part 2: We need to go deeper Keep trying that api call with purrr::possibly() Lesser known dplyr 0.7* tricks Lesser known dplyr tricks Lesser known purrr tricks Make ggplot2 purrr Mapping a list of functions to a list of datasets with a list of columns as arguments Predicting job search by training a random forest on an unbalanced dataset Teaching the tidyverse to beginners Why I find tidyeval useful tidyr::spread() and dplyr::rename_at() in action Easy peasy STATA-like marginal effects with R Functional programming and unit testing for data munging with R available on Leanpub How to use jailbreakr My free book has a cover! Work on lists of datasets instead of individual datasets by using functional programming Method of Simulated Moments with R New website! Nonlinear Gmm with R - Example with a logistic regression Simulated Maximum Likelihood with R Bootstrapping standard errors for difference-in-differences estimation with R Careful with tryCatch Data frame columns as arguments to dplyr functions Export R output to a file I've started writing a 'book': Functional programming and unit testing for data munging with R Introduction to programming econometrics with R Merge a list of datasets together Object Oriented Programming with R: An example with a Cournot duopoly R, R with Atlas, R with OpenBLAS and Revolution R Open: which is fastest? Read a lot of datasets at once with R Unit testing with R Update to Introduction to programming econometrics with R Using R as a Computer Algebra System with Ryacas

It's time to retire the "data scientist" label 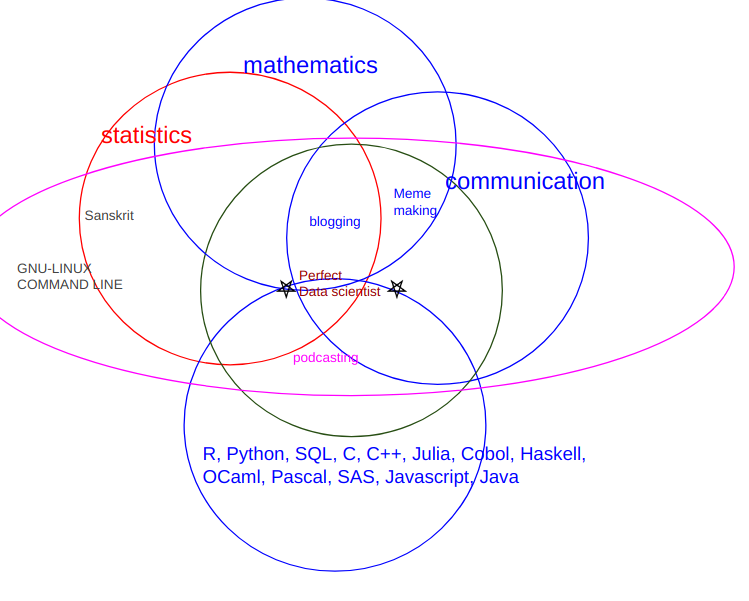 The “Data Scientist” label served its purpose; it allowed us to signal a transition happening in our profession from using only applied mathematical statistical methods to something else, which now also involves the use of a subset of software engineering practices. This transition was mentioned back in 2010 by Deborah Nolan (https://www.stat.berkeley.edu/~statcur/Preprints/ComputingCurric3.pdf), and this transition might now be complete. Version control systems, document generation from annotated source code (or even full reports generation à la rmarkdown), containers and build automation tools have now entered the toolbox of the run-of-the-mill statistician. Maybe not all of these tools, of course, it largely depends on what it is exactly you do, but certainly some of these. Same goes for software engineering practices. I have had the opportunity to work with some old-school statisticians (and still do), and the difference is clear; just like old school users of WYSIWYG editors like Word don’t use its “newest” features such as “Track changes” (and thus keep writing their text in different colors to signal which paragraphs are new), or the concept of versions of a document synced on Sharepoint (and thus keep multiple versions of the same document with different names) old school statisticians have not included the tools I mentioned before in their toolbox.

Now don’t get me wrong here; that is absolutely ok. We need and respect old school statisticians because they’ve been in the business of getting insights from data for longer than I’ve been alive. This blog post is not a jab at them because they don’t know how to use git (if you interpret it like that, that’s on you). Old school statisticians now have very senior positions and for many of them, their job does not involve getting their hands dirty on data anymore; most of them are now more like managers or mentors, and share their deep knowledge with their more junior team members. (Obviously there’s exceptions, when I say all old school statisticians do this or that, I don’t mean all of them, but most of them. Of course, I don’t have any evidence to back that up).

What this blog post is about is the label “Data Scientist” that gets used by these more junior team members and by companies that want to hire talented and motivated young people. This label, and the purported difference between a “Data Scientist” and “statistician” does not make any sense in 2020 anymore. (I know I’m beating a dead horse here, but this is my blog. I’ll blog about dead horses as much as I want thank you very much.)

Firstly, this label has always been confusing. “Data Scientist”… what does it even mean? The fact it took so long to find a definition, and that almost everyone working in the profession has a different one speaks volumes. Also, don’t all scientists use data? Data from experiments, from observational studies, from surveys, from the literature?

Secondly, I don’t believe that you can get a degree in statistics today without any exposition whatsoever to at least some of the tools I mentioned before. I really doubt that there’s people out there getting Master’s degrees in statistics without having ever touched these tools, or the unix command line. The degrees they’re going for might not focus a lot on these tools, true, but they certainly touch upon them. And of course, once they join a team at their first job, they’ll get more exposed to these tools and incorporate them in their day to day work. So, they’re not statisticians anymore? Their degree magically transformed into a data science degree?

But what about data science degrees? Are the students graduating with these degrees statisticians? I’d argue that yes, they are indeed statisticians; it’s just that they took a statistics degree that might have focused more than usual on these “new” practices/tools, and changed its name to “Data Science degree” for marketing purposes.

Anyways, the label “Data Scientist” is now completely defunct; as I mentioned in the very beginning, it served us well to signal that a transition was happening in the profession. I believe that this transition is now complete, or should be nearing its final stages. Also, this transition was not only about the tools used, but also about the deliverables. Statisticians now don’t only deliver tables, graphs and studies but more and more of them deliver products. This product can be a package implementing a bleeding edge statistical method for the profession as a whole, or it can be part of a piece of software that needs it to run (like your smartphone keyboard using a statistical model for word predictions). See this paper for an interesting exposition about how curricula and deliverables have evolved in the past two decades.

Currently, this label gets used by people that try to get insights from data. But we already have a word for them; statisticians. It’s just that the tools of the statistician have evolved over the past decade or so. Actually, I would perhaps even make another distinction; we should reserve the label of “statistician” to people that do statistics without ever touching any data. The other statisticians, the ones that get dirty wrestling in the mud with the data (they’re the pigs that like it from that famous quote) should be called “data janitors”. I’m not even joking; not only does that term already exist and gets used, I think it suits what we do perfectly. What do janitors do? They clean stuff and put things in order. We clean data and put it in order; meaning creating summary tables, visualizations, interactive applications, and models. Oh, and we do so (preferably) in a reproducible way.